Webmiss Magdalena
Me Pasé
Get your copy today! 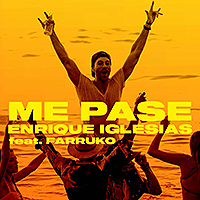 Enrique Online is an unofficial & non-profit fan site dedicated to Enrique Iglesias. I'm not affiliated with Enrique, his record company, his management or anyone officially associated with him. All images or other content is copyrighted to their respective owners. No copyright infringement is ever intended.


•  What does Spanish good looks have to do with the size of your penis? Maybe I have the Spanish looks but I have the smallest penis in the world. I'm serious.

•  Some people say "I love you" with such ease, and for me its always been a difficult word to say. All I can tell you is the first time I said it, I truly, truly meant it.

•  The first six years of my career I didnt have anybody close to me or close enough that I could call my girlfriend. For me a serious relationship is when you can open up and when you can trust that person 100% and you know theyll, theyll you know, take a bullet for you the same way that youd take a bullet for them, and to get to that point it takes time and its not an easy thing.

•  I just want it to be special, and the only way to make sure its special is by, just making it as private as possible, and if you talk about those things that are special to you and that are close to your heart, its not the same anymore.

•  And people coming up asking for autographs, there's only one time when it kind of bothers me: when I'm eating.

•  When you find the perfect person you shouldn't feel any insecurity.

•  With the press, if it's a professional interview and I feel comfortable, I don't mind talking about my personal life.

•  Not that I don't like the other songs, but I love ballads, and I think it's always a risk-taker when you come up with a ballad.

•  But I'm never going to deny where I come from. I'm Latino, and that's obvious.

•  I just want my albums to do something different; I don't want the prior one to sound like the new one.

•  I mean, you need a good production, but the essence, what makes a song timeless, is the melody, the lyric, and of course the production.

•  The one thing about music is that there are no rules.

•  Love is one of my main inspirations.

•  For me, it all starts with if I can sing a song with a guitar and it still sounds good acoustically, then I'll stick it on the album.

•  We're the same blood but the singing style is different.

•  I had a normal childhood. There were women, but it wasn't like Hefner's Playboy Mansion. If it was, I'd still be living at home.

•  My first record contract was for three records in Spanish, and right when that was over, that was a perfect time for me to release an English album, and that's when it all happened.

•  I mean, when you do the same thing as your father... I always want it to be better than my father as a singer.

•  But if it's a good song that touches people's hearts people will come see you in concert 10 years from now just to hear you sing that song.

•  In school, kids never really looked at me a different way because I think it was a different generation; they didn't really know who my father was.

•  The video for Addicted was an idea of mine, and it all came together with the genius direction of Peter Berg.

•  My inspiration are the woman, friendship, and loneliness.

•  I always respect a woman.

•  I say that when you sing in English, it's easier and it does open a lot more markets, but there's exceptions, and there are artists out there that have done it in Portuguese, Spanish, and French.

•  I'm a person that knows what he wants.